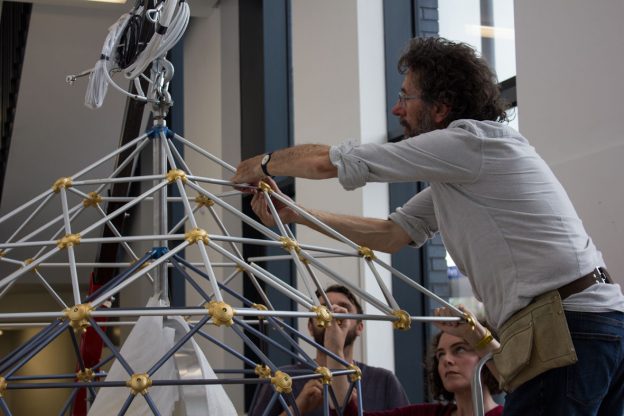 Using a host of local manufacturers all of the components of the Guardian returned to the workshop in early May, bearing their final anodised, plated and polished finishes. Some of the changes in colour were subtle (from raw aluminium to silver-grey), others were dramatic (the central dome is now a bright, gleaming gold) and radically changed the character of these elements with which I’ve been working for so long. 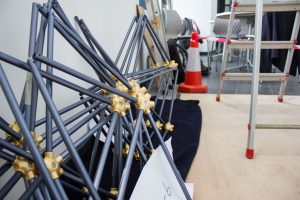 Pre-assembled sections of the structure 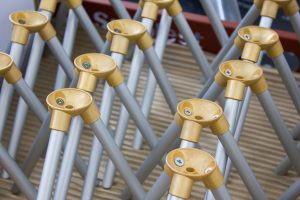 Having constructed, re-calibrated and tested the Guardian Timepiece in my workshops I’d had the opportunity to write a set of ‘installation instructions’ ahead of the final build at the Assay Office. This test run proved invaluable, enabling the team and I to pre-assemble sections of the structure, bolting them together in the workshop ahead of the big build days. These were carefully wrapped and loaded into an unassuming transit van for their final journey to the city. 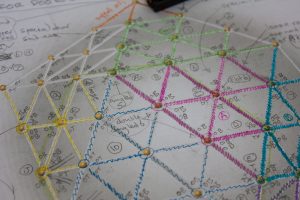 Plans to build the clock 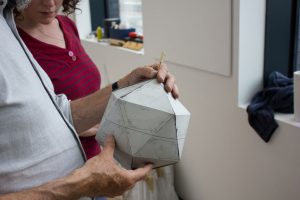 Upon arrival at the Assay Office we occupied the atrium, laying out sections of the structure in order of assembly. I wheeled in the specially modified hoist which would suspend the clock as we built it. The first piece of the puzzle, the Guardian’s central chassis into which we’d already bolted the clock motors and hour discs, was suspended from the hoist. This motor drives the hour discs and minute domes in perfect harmony, rotating each accurately in time. 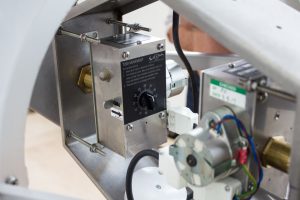 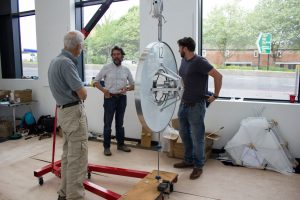 Chassis with internal mechanisms on the hoist

The tailor-made cap, which hides the fixing mechanism of the minute globe, fits into place with a single screw leaving a smooth, unbroken, golden surface. 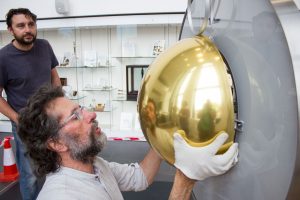 Fitting the anodised dome onto the motor spindle 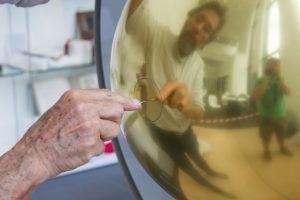 Screwing on the cap

Around this centre we began to build the shape of the Guardian, bolting together the pre-built sections of the structure. Each ‘golden’ bronze node consists of two halves that are bolted together, clamping the aluminium rods in place with an extra location inside the node onto a little ‘pip’ of metal. With practice the team have become adept at handling them, keeping the pieces in place while the screws are tightened. 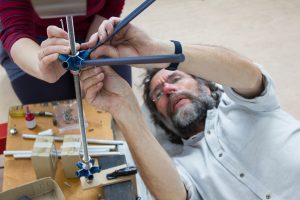 Bolting the rods into the titanium support nodes 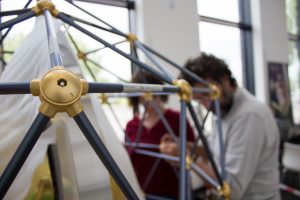 Both the inner and outer shells of the Guardian have an access door planned into them. This ‘door’ is a section of the structure which is partially glued and partially bolted together. It’s indicated through a series of stamped letter marks, punched onto the bronze nodes. These marks are too small to see from the ground but will allow an engineer to detach a section of the structure when and if the mechanism of the clock requires servicing. 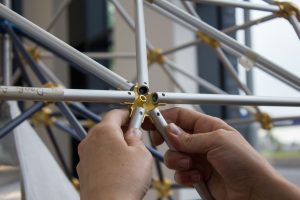 Fitting each rod in its correct position 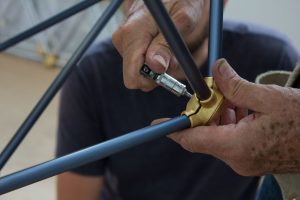 Screwing the bronze ‘nodes’ together

Using a numbered 3D model and copious notes, the inner shell of the structure, made from dark grey ‘platinum’ shaded aluminium, grew quickly and contrasted beautifully with the gilded central sphere. In situ it echoes the blue engineering brick that was chosen for the exterior of Assay Office Birmingham’s new building – serendipitous! We then turned our attention to the paler ‘palladium’ outer shell. 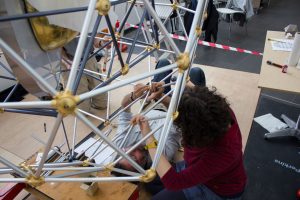 Fitting the pieces of the structure together 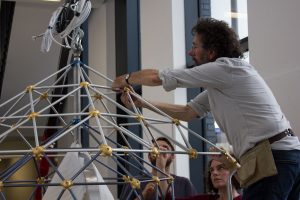 The finish on these rods is closer to that of the original raw aluminium but smoother, with a look more akin to matt palladium. This shell was also built up in sections which quickly became remarkably rigid as they locked together. This confirmed the inherent strength of the icosahedral structures which keep the shape of the Guardian precise, instead of deforming under its own weight. 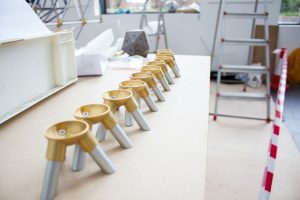 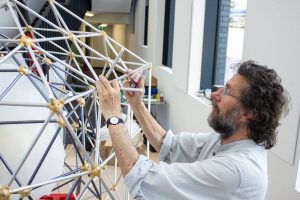 The outer form of the Guardian is composed of a series of ‘cloud’ rods, which create its spherical form that surrounds the inner shape of the molecular structure of the shells. Three rods protrude from each bronze node on the outer shell and are fixed neatly in place with yet another nut. With a multitude of variations the trick is to get the correct cloud rod in the correct place, ensuring an eventual spherical appearance. Wally and I fitted the full complement of cloud nodes at the end of a second day of construction and finally stood back with considerable relief to admire the finished structure!

Early next morning the full team arrived on site again with the addition of a scissor platform and driver. Here Mark Cambriello took charge, directing the proceedings and hoisting the Guardian up intially to head height. I took the opportunity to fit the final piece – a solid silver-gilt finial screwed onto the end of the central stainless steel supporting rod.  Hallmarked with a large Anchor, a small MJP (my mark) and the 2018 date letter ‘t’, it positions the Guardian within the history of the Office. 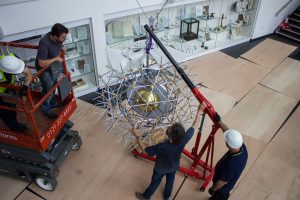 Fitting the suspension cables to the Guardian 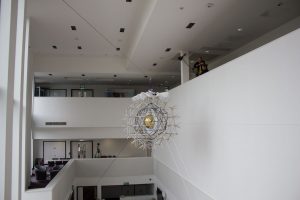 Winching the Guardian into position 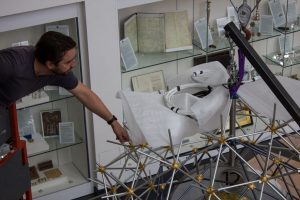 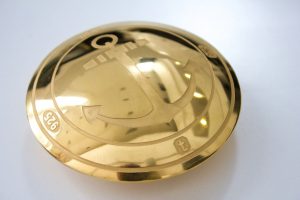 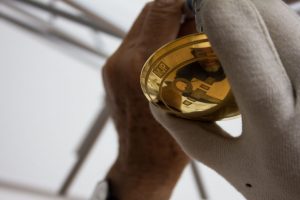 Fitting the finial into place

As soon as I was happy with the orientation of the finial the clock was winched into the air by Mark Martin, the very helpful Office’s Engineering, Facilities & Health and Safety Manager. Using a hand operated winch he lifted the clock on a temporary line before the scissor platform moved in to secure the permanent fixing wires. After the hectic build up there was finally comparatively little for me to do so I took a deep breath, tried not to worry that it would all work and seized the opportunity to stand back and take in the finished Clock  (… while Becca seized the opportunity to make more very welcome tea). 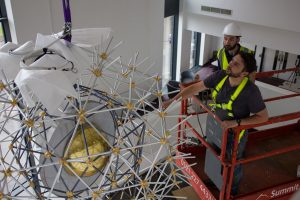 Final adjustments to the hanging clock 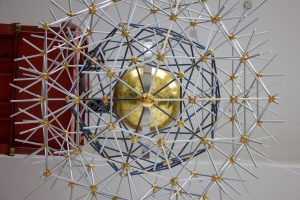 Once the riggers were happy that the Guardian was hanging safely, we made small adjustments to its orientation within the space, took photographs, cleared the floor and headed home. Having worked so closely on the project for so long with all the team it’s strange to think of it being finally in place and I’m relieved to say that everyone’s efforts, creativity and support have paid off as it fits the space and the building very well indeed – I think Matthew Boulton would be happy!

Timelapse Video of the Construction: