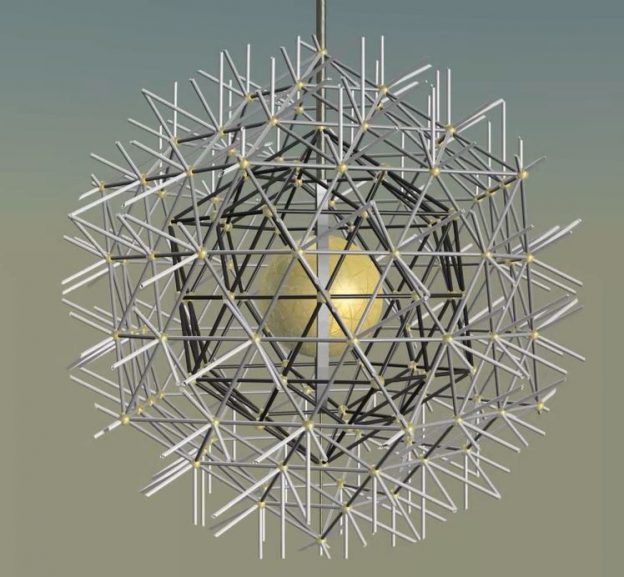 In 2011 The Birmingham Assay Office made the historic decision to leave its Victorian home and move, for the first time in 135 years, to a purpose-built building.  Founded by Matthew Boulton in 1773 this venerable institution needed a home that was more suited to its modern, high tech activities as a state of the art testing lab. 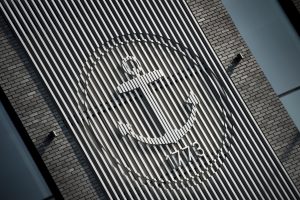 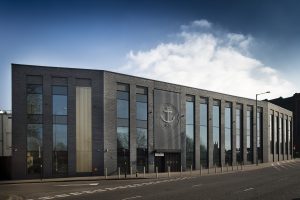 The design for the new building featured, as its entrance, an impressive three storey atrium, an open white space which would introduce the visitor to the precise world of testing. It was ideal for a prestigious artwork that embodied the scientific core of Assay Office expertise, past, present and future. Consequently, parallel to the building of the Office a team of designers and makers led by me were asked by the Wardens to develop a spectacular, functional Timepiece which would be funded by the Guardians of the Office.

Wally Gilbert and I set about researching a form that would represent Assay Office Birmingham’s core, precision scientific skills and values in the innovative tradition of its founder Matthew Boulton. 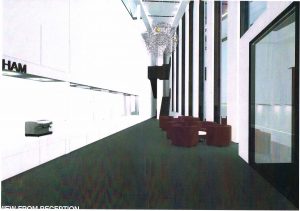 An early sketch of the Guardian’s position 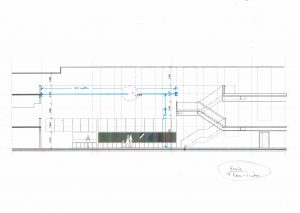 The Guardian skecthed onto architectural plans

Having developed the idea of suspending a precious metal crystal structure within the space, Wally suggested that it would be appropriate if we used an algorithm to create the design. Unfortunately we didn’t know what an algorithm was – we needed an expert! Enter modern alchemist Dr Simon Plant of the Nanoscale Physics Research Laboratory at the University of Birmingham. He specialises in doing arcane things with precious metals that are subsequently utilised in the scientific, medical and industrial arena. Thus Art met Science.

Wally and I were captivated by the atomic structures of the particles with which Simon was working and the mathematical modelling he used to represent them. We began to work with their shapes, searching for a scientifically relevant and aesthetically pleasing form to inform the structure of the piece. 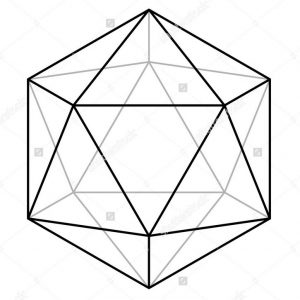 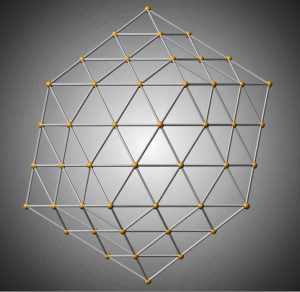 The breakthrough came with the discovery of the pure icosahedral shape of the nano particle Gold Au147, a lab-created gold that behaves differently to its natural counterpart. It consists of three layers of atoms that, when rotated, reveal a fascinating array of interference patterns produced by its hexagons, triangles and pentagons culminating in the diamond pattern visible from directly underneath the structure.

Its fundamental platonic structure was the inspiration for Buckminster Fuller’s creation of the geodesic dome and carbon based Fullerene, one of the strongest materials then known. We had found what we were looking for – the perfect timeless, mathematical, scientific structure engineered to represent one of Birmingham’s oldest yet most high tech institutions – a Guardian of its core value of integrity. 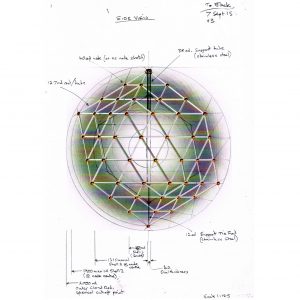 Initial Sketch of the Guardian 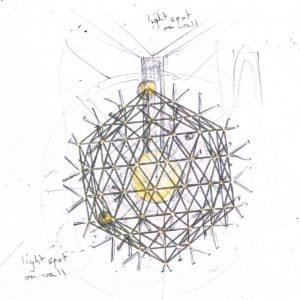 Initial Sketch of the Guardian

The form of the timepiece evolved from our observations into a multi-layered rendering of an Au147 particle, which through the use of colour could represent the four precious metals – silver, gold, palladium and platinum. Suspended from a central stainless steel chassis, the remotely operated Timepiece mechanism is housed within the central nucleus of the particle –  a gold ‘minute’ sphere divided by a silver rotating ‘hour’ disc to provide the Timepiece with two faces for 360 degree visibility.  The visibility of the numerals is limited for visual simplicity, only being displayed when needed for time-telling. 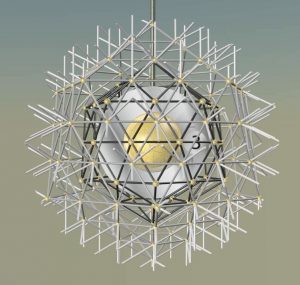 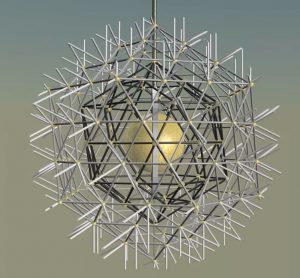 The Guardian Timepiece – side view

The surrounding spherical cloud of the outer shells is composed of golden bronze and laser sintered titanium nodes linked in a lattice of ‘palladium’ and ‘platinum’ coloured aluminium rods. This lattice structure spreads out from the dense central golden globe into the open space of the surrounding atrium.

The Guardian will be visible through the front of the building by day and night. Designed in the spirit of our founder Matthew Boulton, this spectacular, engineered, functional Artwork celebrates both the cutting edge and traditional skills of Birmingham.

The final technical design phase is now completed bringing to a conclusion a three year gestation of ideas – time to cut metal!!