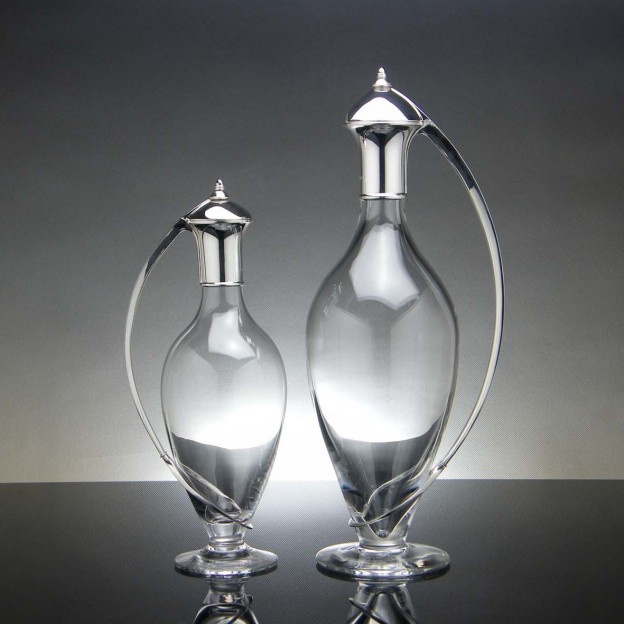 The enduring popularity of claret jugs and their statement presence on the dining table inspired me to work on a contemporary version, which I completed near the end of my degree. It’s a classically inspired but thoroughly modern claret jug, using full English crystal and sterling silver and echoes the curvilinear forms associated with grapes on the vine. 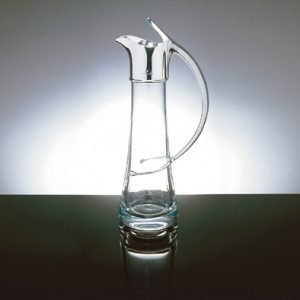 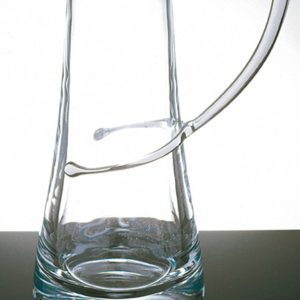 Claret jugs typically have glass or crystal bodies as the colour of the claret, a dark variety of Bordeaux, is one of the key indicators of the quality of the wine. A jug with a clear body advertises this level of excellence to the whole dining table, providing a beautiful contrast with the silver mount.

The structurally weak point on many claret jugs is the joint between the silver mount and the crystal body. Here I’ve given the jug a comfortable ‘D’ sectioned, strong handle that curves down into a ‘stirrup’ that fixes flexibly to the English Crystal body, providing extra support during pouring.

The lids of the jugs are typically unsealed and are mainly used as a dust cover, allowing the wine to breathe once it has been poured from the bottle. I have been commissioned to make claret jugs for wine connoisseurs that have sealed stoppers which are used to control the wine’s exposure to the air for a specific length of time, typically an hour, after decanting to allow the sediment in a rare wine to settle.

My next design, the straighter, more minimal Dome Claret Jug has a handle which is slightly sprung against the body, using the particularly securely fixed mount for strength. 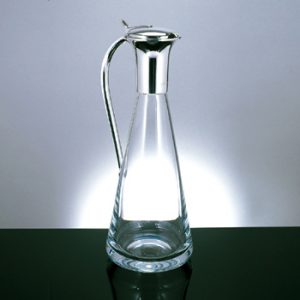 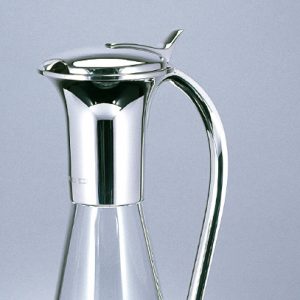 The lids of all of my jugs remain closed when they pour using discreet cut-outs in the lid to allow the claret to pass through. I undertook a large amount of research into the theory of attaining the ‘perfect pour’ before settling on the correct form of the pouring lip, to make sure that they pour ‘drip-free’. 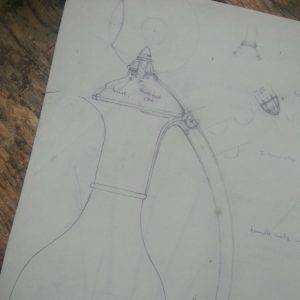 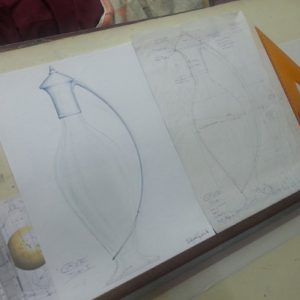 The Curve Claret Jug was the winner of The Goldsmiths Company Contemporary Tableware Award, the original of which is in their collection. It is the balancing point where my earlier design concepts coalesce. This jug has a classic, delicate feel, with a pure curve handle whose line continues across the profile of the body, flowing around it to form a supportive loop. The shape of the lid and finial were influenced by the architectural form of a Byzantine dome. 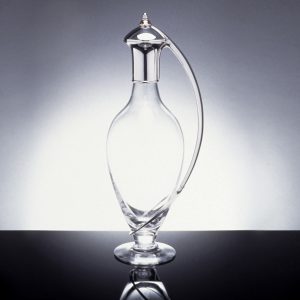 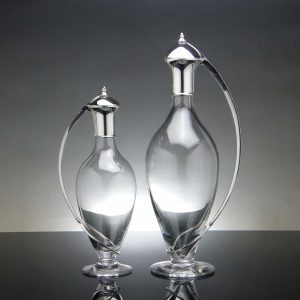 The elegant form of the body was inspired by ancient Greek amphora’s – storage vessels used for wine and oil, whose curving, elliptical shape is eternally compelling. These subtle lines recur in much of my work, from the bodies of this Flow condiment set through to the curves in my Juno earrings and the forms of the Arc series.

Occasionally I have been asked to produce magnum versions of my designs, such as the ‘Curve’, or jugs constructed in a micro-alloy of 24ct gold and titanium or pure palladium which have provided a fascinating technical challenge to execute, pushing me to explore the boundaries of the possible.