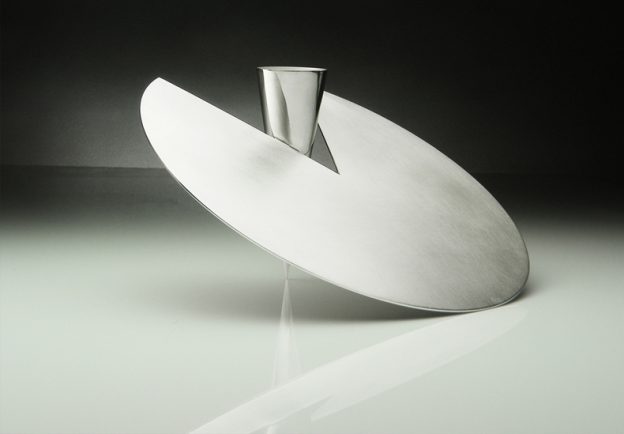 In 2018 I began a fascinating collaboration exploring 2D geometry in the 3D world. Silver sculpture is becoming increasingly prevalent and while I have always been known for making deeply practical pieces I’m increasingly interested in form without function and the idea of expressing the purity of geometric principles through art intrigued me.

My collaborator, Frank Rhodes is a research mathematician who spent the majority of his career working at Southampton University. Having completed a study of metric spaces to gain his PhD he went on to work extensively on algebraic homotopic theory, eventually developing what are now known as Rhodes Groups.

Homotopy (which I’d never heard of before!) is the complex mathematics describing how the ‘stretchy surface’ of a shape can be deformed into a different shape without being cut. For those of you (like me!) who wish to attempt to understand it, take a look at this link that shows a doughnut turning into a mug and back again:

Though, interestingly, I realised that this is what I do when I transform a flat piece of silver into a vessels like these: 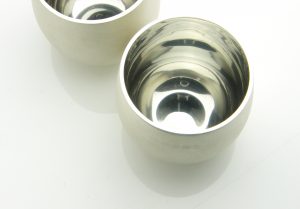 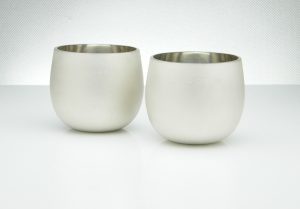 However, the Disc Series is, as Frank says “…not topology (homotopy) but solid geometry, in the sense of two dimensional figures in three dimensional space. The interest comes in the restrictions inherent in the decision to use a complete disc, with no waste, in each object, by cutting, bending, folding and soldering a silver disc without stretching the silver.  If more of the disc is used in one component then there is less for the other components of the object, and that is what leads to the interest and the tension”

This I can understand!

Frank absorbed the principles of design and manufacture from his boyhood reading of Harmsworth’s Self Educator, which together with the ‘can do and make’ attitude of his parents, eventually led  to a wide interest in all things cultural and mathematical. Having made jewellery for his wife, some based on a Mobius Strip, ten years ago he bought his first piece of contemporary silver and, following the publication of Designer British Silver his interest blossomed.

But he had questions ‘Where are the Picasso and Salvador Dali of silver?  Where is the Degas, bringing balletic movement into silver?’

Takuya Kamiyama’s Sea Urchin vase answered one of his questions: ‘Can a torso strike a pose, or must one have arms and legs?  Clearly, a torso alone can strike a pose, and a top edge can sing’. He began to wonder how figures made using the whole of a circular disc of silver would look, particularly cones in relation to the rest of the disc.

His ideas chimed with my own fascination for the proportions and mathematics of beauty, thus, through many conversations, the studio Disc Series was born.

It’s a group of objects whose forms all begin as a single flat disk of silver with identical dimensions. They individually express apparently simple geometric ideas, but this simplicity poses a significant challenge to their maker. Beginning with paper models and detailed, layered drawings, each piece is calculated and measured to exacting levels, allowing me to indulge my inner engineer. The positioning and proportions of the components  of each piece conform to a common Rule – they are carefully calibrated to use only measurements that are whole fractions of 360°. This imbues each piece with a natural, harmonic balance. 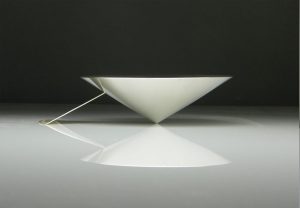 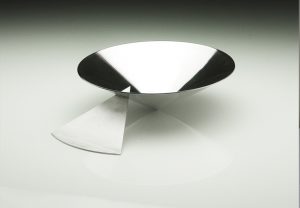 ‘DISC 1: equilibrium’ shows it’s origins clearly – it’s possible to visualise the flat sheet of metal from which it emerged. Here, as with the whole collection, accurate measurements were key. A wedge was removed from the circle which was then formed and polished to produce the body of the piece. 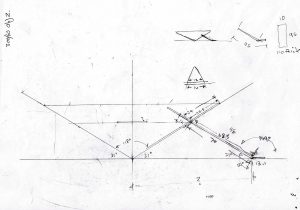 The segment that was sawn away balances the object, leaning at an angle of 30° from the horizontal that matches that of the cone profile. It penetrates the cone at exactly 1/3rd of the distance from the top edge to the cones point, this alignment makes the protruding internal segment a satisfying equilateral triangle. 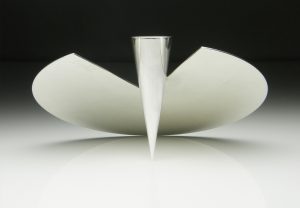 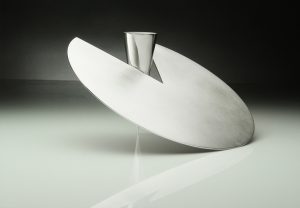 The light, floating appearance results from the piece only having two small points of contact with the ground – the point of the cone and the edge of the disk. The Rule applies, the disc being 30° from the horizontal, the 90° upright cone attached 2/3rds from the disc edge to its centre . It acts similarly to a highly sensitive spirit level, requiring a precisely horizontal surface to stand perfectly upright. 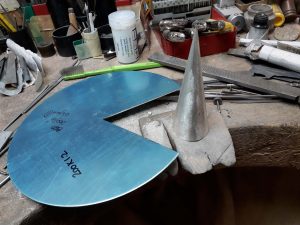 ‘DISC II: pi’ in the making 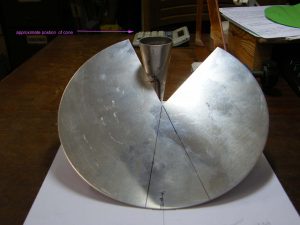 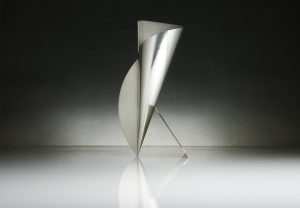 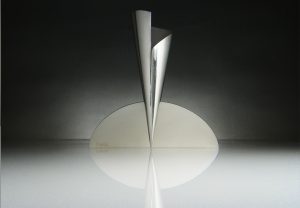 With a spiraling top edge that flows down via its arced ‘fin’ to its point, ‘gyre’ leans back on a segment of the original silver disc (60° from the horizontal – the Rule applies) from which it was cut. The strong contrast of matt and polished finishes dramatically emphasise the dynamically minimal contact between the two different shapes that have, nevertheless, emanated from the same source – ‘will they fall, won’t they fall!?’ 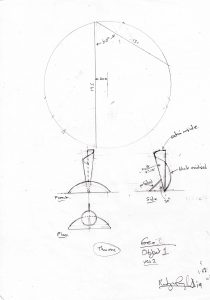 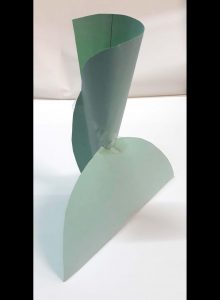 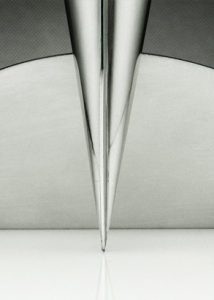 With the entire Disc series, translating the paper models into the precise forms of metal sculptures required a combination of structured planning and ad-hoc practical adjustments. Soldering each piece together required a series of specially constructed soldering supports. Here the pre-finished body of ‘gyre’ is wedged between several heat proof bricks, the fin being secured in place with one of my favourite soldering props – a well worn and oft-heated file. 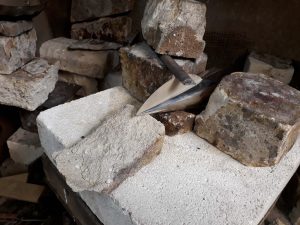 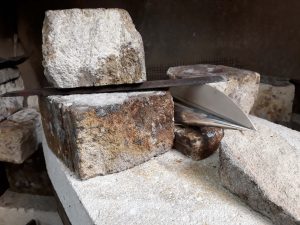 Ensuring that nothing moved or deformed while being heated was crucial, quite a challenge when working with large flat sheets of a metal that conducts heat so well. 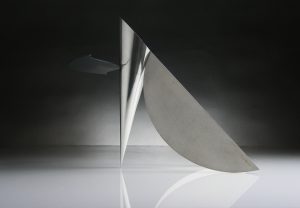 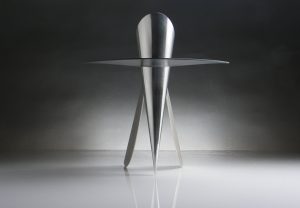 This is the most complex piece of the series so far, with multiple components joining the central cone – the Rule applying again. The top line slopes cleanly down from the edge of the vessel and only 3 points of contact with a surface keep the object stable. The piece ‘strikes a pose, its top edge singing’;  tension created in an almost zoomorphic form – poised for take off! It makes me smile. 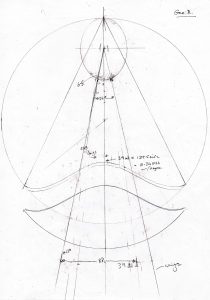 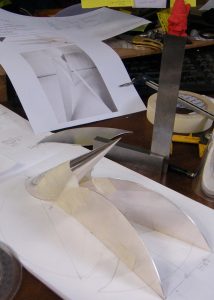 ‘DISC IV: equipoise’ matching the model to the drawing 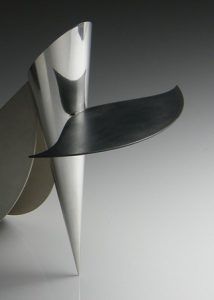 The whole collection demonstrates my belief that the use, whether conscious or unconscious, of mathematically pure dimensions that relate logically, creates harmonic beauty.