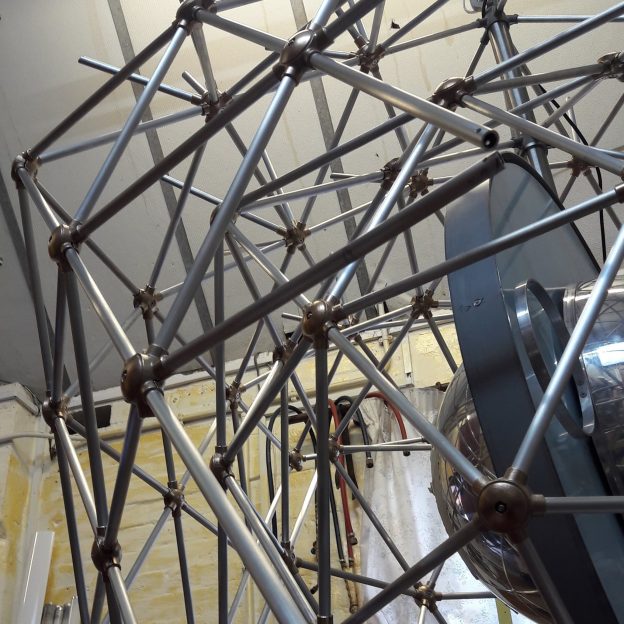 With the hanging date of the clock approaching, the final pieces of the project are now coming together and forming a whole. 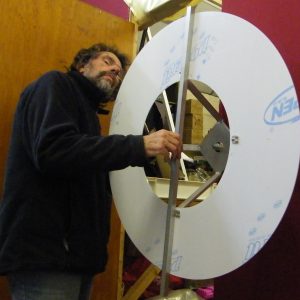 Measuring up the Hour Disc 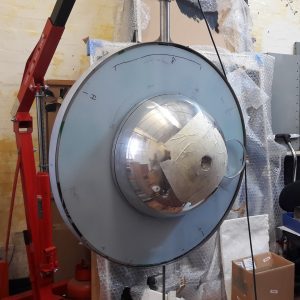 A disc surrounds the structure’s core golden globe which revolves to reveal the hour numerals of the Guardian. Numbers emerge progressively through a quadrant mesh on the moving ‘silver’ face of the hour disc. Minutes are indicated by the position of a mysteriously ’floating’ silver minute ring which moves around the face of the clock.

The two minute rings (one for each of the clock’s two faces) were made from a strip of aluminium which was malleted into shape, before the ends were welded together. These rings bolt invisibly onto the edges of the central golden hemispheres which revolve at minute speed. The weight of each minute ring is balanced by a concealed lead counterweight inside the sphere. 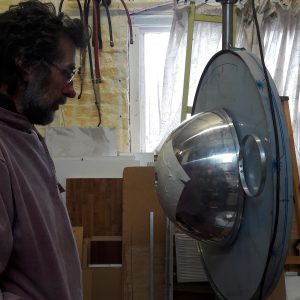 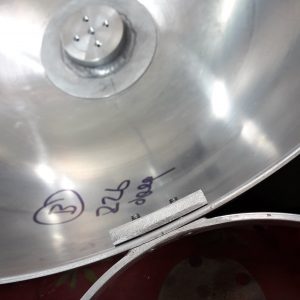 Bolting on a Minute Ring

These counterweights were cast ‘traditionally’ by melting lead in an old baked bean can and pouring it into a specially shaped mould. These weights were then refined and tested to ensure perfect balance. The weights keep the equilibrium of the mechanism constant, reducing motor wear and ensuring  good timekeeping.

Ahead of the final construction of The Guardian in Assay Office Birmingham’s foyer, myself, Becca and Wally ran a test construction in my second workshop (normally used for storage!). This enabled me to figure out the fine details of building the structure (including adding removable ‘panels’ for a maintenance engineer to use in 100 years time); something which could only be done with all of the pieces in my hands. This process sought to prove, hopefully, that five years of hard thinking and complicated calculations had worked.

We hung the clock mechanism on a specially modified hydraulic car engine hoist. This rig gives us the freedom to rotate, raise and lower the timepiece, seeing it from all angles as the layers of mathematical shapes are built up.  Walking around the structure as it grew, after years of imagining it in my head, was a strange and magical experience. 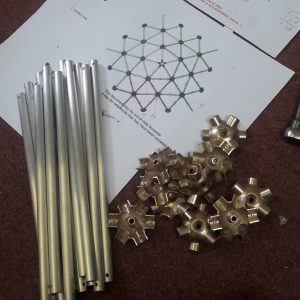 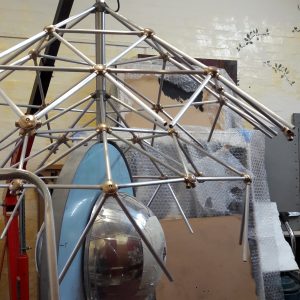 The Structure coming together

The critical clearances of the central rotating time-keeping components – the globe, discs and motors, needed to be checked and adjusted first, for on these the clocks’ accuracy and longevity depends. Having established the crucial dimensions I used my trusty Myford lathe to turn the aluminum spigots that connect the motors to the globes:

With the globes temporarily assembled, I switched on the motors for the first time. They appeared to have failed, a disaster! I then realised, with great relief and some embarrassment, that they were, of course, silently and efficiently moving at minute speed! I could now see the timekeeping in action and the design becoming a reality. After many hours of testing and painstaking adjustments over several anxious weeks, I was finally confident that the clock would accurately tell time, both at its inception and years into its future!

With this matter settled we could begin to build the outer, sculptural structure of the Guardian. Balancing on stepladders, we first built up the inner shell, following with the upper parts of the outer structure that surrounds it. As the final timepiece would have a diameter of two metres, reaching over to work on the middle of the clock would be too much of a stretch. The solution was to build the outer structure in layers from the top down, taking advantage of gravity to elicit the icosahedrons’ inherent strength, evenly working down towards the base and progressively enclosing the golden sphere.

Perhaps the most challenging part of the construction was holding everything together. I’ve realised belatedly that I should have employed an octopus (or maybe two…) for this. They would have been able to hold 5 or 6 aluminium rods and the two halves of several golden connecting ‘nodes’ for me while I bolted the parts into place. Alas, I had to make do with either Becca or Wally’s help, with the two of us balancing the pieces between us, using fingers, mouths, pockets, a great deal of focus and the odd expletive, whist we desperately tried not to drop anything. 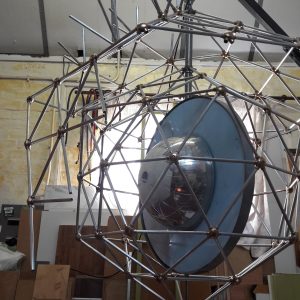 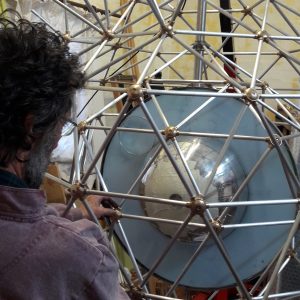 After a lot of practice and a little gorilla tape a smoothly choreographed team system developed whereby all components miraculously came together and, unbelievably, fitted! The result of all the thinking, designing, and careful making by the whole team had yielded this spectacular and complex structure.  After 5 years of living with an idea in my head it had finally become a reality – a weird but, very gradually, happy and relieved feeling indeed!

However, the story is not yet over. After stripping down the whole structure, the Guardian will be given its final resplendent finishes before its completion. The aluminium components will be anodised to their palladium, platinum and gold colours by Badger Anodising; the bronze nodes will be gold plated and lacquered by Pete at Scene In Silver (generously funded by Weston Beamor) to enhance and protect them; the titanium nodes will be anodised blue by Brian Eburah and the hour disc and dial printed with the silver mesh pattern and black numerals by 8 x 4 Media.

The Guardian will finally appear as intended, a reflection of the colours of the four precious metals tested and verified by Assay Office Birmingham.

Next time, Part Four: the installation and inauguration of the Guardian, the conclusion of this rather epic journey.