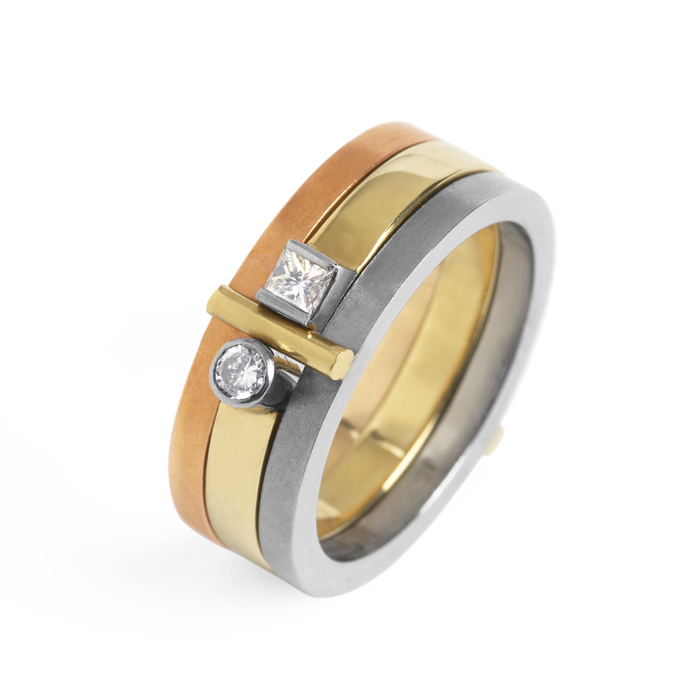 Although I am happy to work in most metals, I chiefly work with the four hallmarkable precious metals These are Silver, Gold, Platinum and Palladium.
There are various metals that you can choose for your jewellery and they all have their own advantages, disadvantages and cost implications. This page gives you a quick rundown of the various options so that you can make an informed decision,

Pure gold is almost completely non-reactive which means that, unlike other metals it won’t dull down or corrode through contact with oxygen and other aggressive chemicals, which would make it ideal for use in jewellery if it wasn’t so soft. This softness means that it has to be mixed or alloyed with other metals to give it strength and toughness.

The colour and volume of the metals used in the alloying process effect the colour and the purity of the gold.

The metals alloyed with gold are chiefly silver, copper and palladium. More copper in an alloy results in red (also known as rose or pink) gold, more silver gives you green gold (a paler shade of yellow) and the addition of palladium produces white gold.

Upon close inspection, you’ll discover that so called white golds are not very white. 9ct white gold is a very pale yellow and 18ct white is more of a cream colour. Most white gold on the High Street has been coated with rhodium to give it a hard white shine. Sadly this coating wears off fairly quickly and the appearance of the jewellery changes. I would generally choose not to use rhodium where it will wear off (but I will if you make me!) so you need to choose your white gold with care and an eye to the long term.

Platinum is a white metal and is rarer and more dense than gold and consequently more expensive. It is also much tougher than gold and working it takes considerably longer.

The most popular fineness of platinum is 950 parts per thousand.

The least well known of the four. I have been working with Palladium for several years and have become very familiar with its properties. When I sat on the board of the British Hallmarking Council I was instrumental in Palladium gaining it’s hallmark status on 23rd July 2009.

It is a Platinum group metal and is very white.

Palladium is approximately half as dense as platinum which means that identical articles are much less expensive in palladium than in platinum, as they contains less weight of a currently cheaper metal. This lightness can be an advantage in practical terms. Bold earrings made from platinum would be uncomfortably heavy, whereas a palladium alternative could be very wearable.

As with platinum the most popular fineness of palladium is 950 parts per thousand.

Silver has always been much more common than gold and so is a fraction of the price. Because it is softer than gold, platinum and palladium it’s not really suitable for claw set engagement rings that will need to withstand a life-time’s wear.

It is, however, ideal for silverware as it is the whitest and, when polished, the most reflective of the precious metals.

The standard (parts per thousand) for silver are 925 which is ‘Sterling Silver’, 958 or ‘Britannia Silver’ and ‘Pure’ or ‘Fine’ silver at 999, which can be used when it’s easier working properties are useful and it’s relative softness is not a disadvantage.

Generally it’s 925 (Sterling) that’s used in jewellery and regularly for silverware, as it’s a bit harder and tougher than 958 and so resists wear rather better.